It was love at first sight!  In February of 2005 I found a 1991 Toyota MR2, T-top with leather seats, for sale on eBay.  With each bid, my heart raced faster. The price was rising to the point I knew I should stop bidding.  But I REALLY wanted that car!  Fortunately, the other bidders quit just before the price hit my ceiling, and I won the bid!!  A few days later I flew from Virginia Beach, VA to Tampa, FL to pick up my “new” car.  I can’t recall ever being more excited about making a 12 hour drive than I was that day.  And so began my adventure with my favorite car ever.

Over an 11 year period, I drove almost 150,000 miles through at least 15 states in that little car.  It became a source of joy for three generations of Holladays.  After I graduated from Regent University in May 2006, my vehicle needs changed and a 2-seat sports car no longer was a fit. My dad had become fond of the little car, so he purchased the MR2 from me. After 18 months and a hip replacement,  my dad decided he would prefer to see his grandchildren enjoy the car. The MR2 keys came back to me wrapped in Christmas paper with a bow!

With a center of gravity just under the driver’s right elbow, that car would hug a curve tighter than a toddler hugs a teddy bear.  My kids and I enjoyed many drives on curvy county roads that paralleled the thrill of roller coaster rides!  On one occasion (that’s my story and I’m sticking to it), Griffin and I clocked our time from the south end of Old County House Rd in White Bluff, TN to the Charlotte, TN line just over the Jones Creek bridge at 59 seconds.  That section of road, with its sharp turns, dips and hills, normally required at least 3 minutes to navigate in the Suburban. I was never able to break that record, although I admit I tried a time or two.

Savannah learned how to drive a stick shift in the MR2, thanks to her Aunt Drea. Griffin actually learned how to drive in it. Baby Ruth and I made several trips together in the MR2 during the years she presented with me.  One of my favorite memories of her in that car happened in Holladay, TN at the North 40 Truck Stop.  I had a take out container of pumpkin crunch left over from Thanksgiving that I had packed for the road.  I stopped to fuel up at the truck stop.  In an effort to “Baby Ruth proof” the pumpkin crunch, I stashed the take out container up under the brake peddle and slid my seat forward.  When I returned to the car, I noticed Baby Ruth licking her lips and traces of whipped cream around her mouth.  Sure enough, my 80 lb. 10 year-old rottweiler had managed to get to the pumpkin crunch.  The only trace of the dessert left in the car was quickly disappearing from Baby Ruth’s lips!

By far the most memorable adventure involving the MR2 happened in the Grand Canyon.  Griffin and I drove the MR2 out to Prescott, AZ to tour Embry-Riddle Aeronautical University during spring break 2015.  On the way home, we detoured by the Grand Canyon and spent a night in the park.  After a day of sight seeing via bicycles and a hike into the canyon, we started toward Flagstaff for the night.  About 10 minutes into our journey east along the rim on Desert View Dr., smoke began to 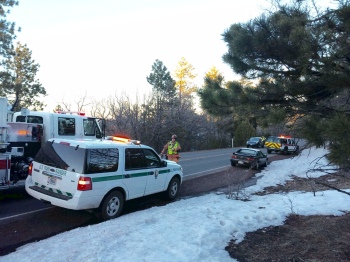 Emergency crews respond to the 911 call about the MR2

pour from the engine compartment of the MR2.  I pulled over, grabbed my computer bag from the trunk, and we ran back about 100 feet from the vehicle.  I called 911.  I think every member of the Grand Canyon National Park emergency crew arrived on the scene about 10 minutes later.  That event may be the subject of another blog post in the future, but the short story is Griffin and I left the MR2 at the Grand Canyon and returned home.  Two months later my dad and I made a trip back to the Grand Canyon to retrieve the MR2.  That trip was another adventure in itself!

Even typing those words almost two weeks after the decision brings tears to my eyes. The MR2 was connected to a sea of memories of raising children and adventures on the road.  It’s been like a friend for a decade of my life.

But sometimes the price of holding on is more than the pain of letting go.  Be it an addiction, a relationship, a collection of “stuff” or something else,  maybe it’s best to open our eyes to the toll it’s extracting.  Stealing joy from the future by holding on to the pleasure of the past seems like a focus in the wrong direction.  Anything you need to let go? 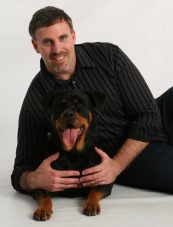 Hello.  My name is Steve Holladay.  I am the father of 4 children, am married to my wife of 18 years, and live near Dallas, TX.  My house is also home to 2 rottweilers, Baby Ruth and Little Texas.  I enjoy a good steak and am very fond of chocolate in almost any form.

In many ways I’m not much different than most people.   I enjoy spending time with friends.  I try to do more than time will permit.  I juggle responsibilities of marriage, fatherhood, work, and ministry, and sometimes find myself off-balance in the process.  I experience financial challenges, struggle with doing the right thing, want to be liked, and sometimes wonder what if…

In other ways I’m somewhat unique.  I was on the loosing end of a battle with sexual addiction from childhood until age 33.  I am 7 years into my recovery and am greatful to God for leading me in the healing process.  I am frequently invited into the lives of others seeking help for issues related to sexuality.  I walk with people as they visit very difficult pieces of their life.  These experiences provide me with an uncommon perspective on the subject of sexuality.

God’s gift of sexuality, intended to be a source of pleasure, mystery, intimacy, and security, has been distorted in this fallen world and robbed of its true value.  For many, sex is viewed as dirty, shameful, secretive, hurtful, and empty.  I’ve lived both.  I value the former and regret the latter.

I hope you will find the insights I share in this blog of value.  I envision that some posts will be educational, some inspirational, and some down right humorous.  Sometimes I’ll share information, other times I’ll share myself.  I invite you to share as well.